So this is a blasphemy of sorts for me, but I may have been more excited about lunch at Heston Blumenthal’s The Fat Duck than I was about meeting  the real Father Christmas in the Arctic Circle. It was a tie at least.

I want to acknowledge two things to start with;

1) This is not a very well written entry- it is really just to sum up the dishes we ate at Heston’s for those that are interested as promised in the London blog. Apologies.

2) I have now written more words on this travel blog than I have on my thesis.

As described in the last entry, the restaurant was simple and lovely, and the staff were also lovely (but not simple).

In order to get a booking at The Fat Duck, you need to book online as reservations open 90 days in advance. We tried a few experimental bookings and could see that you needed to be sat waiting as the bookings opened (about 8:30pm Australian time) if you wanted to be successful.

We booked in for 12:00pm. The menu asks that you allow 3 ½ hours for your meal however we rolled out of there at about 4:30 in the afternoon.

The Fat Duck offers a tasting menu only. There is also the option (for another couple of hundred pounds) to pair this with a wine tasting menu. Needless to say, our budget did not allow for this!! I think most people would also be perfectly satisfied concentrating on the incredible sensory feast laid out before them without adding boutique wines into the mix.

We started with a glass of Moet each and then picked a McLaren Vale red, Yangarra Estate mouvedre, from the wine list that required two hands to hold and is the size of a medieval bible.

Serving a vegetarian option of the menu was no problem, and the restaurant makes a point of noting that they can cater to most dietary requests with advance notice. The other thing that was quite nice, is that they make special note of the fact that there is no dress code. None the less, we did try and dig the nicest bits out of our backpacks.

There was certainly a sense of fun at the restaurant and we didn’t feel out of place taking a couple of subtle and not so subtle pics of our food… even the people who looked like they could afford to eat there were doing it. I think the focus is on the whole ‘experience’ and one of the particularly nice touches was that in addition to the variety of souvenirs you acquire throughout the meal, you are presented with a wax sealed copy of the menu to take home, (I was also lucky enough to get a signed birthday card).

You can take it as a given that all the descriptions of the dishes below should be followed with ‘Yummy,’ ‘Amazing,’ and/or ‘Incredible.’

AERATED BEETROOT WITH HORSERADISH CREAM This was not listed on the menu but was served as a pre-aperitif (if there is such a thing). This was a little bit like a globe shaped holey beetroot macaroon filled with horseradish cream. It was very tasty but also gave you the satisfactory indulgence of having really tiny food served on huge crockery.

NITRO POACHED APERITIFS Vodka and Lime Sour The set up for this dish comes out by trolley to your table. The waiter dips a spoonful of what I imagine is an egg white type mixture into a steaming pot of nitrogen and removes it as a delectable white puff. This is then powdered with a cocktail flavouring of your mixture as a scented spritzer is sprayed into the air over the table for general ambience!

RED CABBAGE GAZPACHO Pommery Grain Mustard Ice Cream Visually striking, this purple soup  is served in another oversized bowl with a sculpted dollop of mustard ice cream. This tasted very good but was probably my least favourite of all of the dishes.

JELLY OF QUAIL, CRAYFISH CREAM Chicken Liver Parfait, Oak Moss and Truffle Toast/ JELLY OF SMOKED MUSHROOM, TRUFFLE CREAM & PEA Oak Moss and Truffle Toast This was the first of the spectacle dishes. The waiter informed us that it was designed to showcase the  taste of the earth. The centre of the table was set with a bed of moss from which spilled dry ice steam all over the table.

The  jelly dishes were served in little bowls that looked like sixties swinging egg chairs and were delicious, but the standout was the finger of oak moss and truffle toast!  This was by far the tastiest item of the day. Unfortunately I’m not sure if I will be able to afford truffle toast for breakfast everyday when I get home.

SNAIL PORRIDGE Iberico Bellota Ham, Shaved Fennel/ PARSLEY PORRIDGE  Shaved Fennel This was one of two dishes that Ryan had expressed a little bit of concern about but he loved it. He raved about it and is now looking forward to another opportunity to try snail!

ROAST FOIE GRAS Barberry, Braised Kombu and Crab Biscuit/ ROASTED AUBERGINE Aubergine Puree & Braised Kombu The centre piece of the veggie version of this dish was a small, firm jelly like rectangle and was not discernible as aubergine in any way, shape or form but was delicious.

MAD HATTER’S TEA PARTY (c.1850) Mock Turtle Soup, Pocket Watch and Toast Sandwich Another spectacular performance dish, this course started with a bookmark (not edible) with the mock turtle from Alice’s Adventures in Wonderland. The toast sandwiches were served on a Mad Hatter’s hat but the pocket watch and soup are the exciting part of this dish.

You are presented with a gold pocket watch which is then dissolved in the top layer of a glass tea pot. You then pour your pocket watch infused broth into the bottom section of the tea pot which houses a faux egg yolk sprouting teeny tiny mushrooms.

“SOUND OF THE SEA” This probably doesn’t need much description for Heston fans. For this course you are served your very own slice of the beach- sand, foam, seaweed and various fish/shell debris (all edible and none of it fish for the veggie option). The sea is also delivered to you audibly as you listen to sounds of the sea from an ipod sequestered in your own shell.

The foam/sand combination is a little disconcerting at first… I don’t really know how to describe it except to say that you really do feel as though someone has just waived a magic wand at a section of beach and turned it into food!

SALMON POACHED IN A LIQUORICE GEL Artichokes, Vanilla Mayonnaise and Golden Trout Roe/ BEETROOT RISOTTO Sour Cream Sorbet This was the second dish that Ryan was a little bit nervous about but, again, it was a favourite and in close competition with the Snail Porridge for first place apparently! The Beetroot risotto was not a mind bender but it was a far cry from gluggy or heavy rice based risotto and the presentation was very cute with the beetroot pieces cut into five cent piece sized rounds and laid by hand across the entire top of the dish.

SADDLE OF VENISON Beetroot Soubise, Risotto of Spelt and Umbles/ VEGETARIAN BONE MARROW Marmite broth and Sauce Gribiche Both dishes were delicious. The vegetarian bones appeared to be carved out of fennel and were filled with a hearty vegetable marrow and the standout element of this dish was the sauce gribiche which appeared to be balls of deep fried Hestonised aioli type sauce! 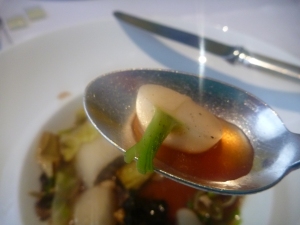 BOTRYTIS CINEREA I am not usually a big dessert fan but this was outstanding…particularly for a dessert that is named after grape rot! It was a plate full of dessert ‘grapes’, each one different… from ice cream to chocolate, fruit, gels and jellies. This was also decorated with vine leaves made from something I can only call ‘delicious, sweet crunchy’ and vine stems that will be known as ‘shiny, delicious, sweet crunchy.’

Of the dishes not involving any pantomime or props, this was probably my favourite combination of wow factor plus taste.

THE “BFG” Black Forest Gateau As described but more amazing than any gateaux or black forest cake you’ve ever eaten.

WHISK(E)Y WINE GUMS These are really cute wine gums that come affixed to a map that indicates the origin of the whiskey they have been infused with from Glenlivet to Jack Daniels. They tasted incredibly good and almost made me want to start drinking whiskey… and then I remembered that for the most part, whiskey is gross.

“LIKE A KID IN A SWEET SHOP” The finale to this spectacular lunch was a sweet shop bag full of goodies; aerated chocolate mandarin jelly, apple pie caramel with an edible wrapper, a Queen of Hearts card filled with tart jelly and finally a pouch of ‘Coconut Baccy’- coconut infused with an aroma of black Cavendish tobacco.

Bec is an author from the Gold Coast with over 10 years of freelance writing experience. Her first picture book is being published by Larrikin House in 2022.
View all posts by bec16 →
This entry was posted in Matryoshka, White Christmas and Reindeer Burgers, Travel and tagged Fat Duck, Food, Heston Blumenthal, London. Bookmark the permalink.