All my spelt and umbles

In my humble opinion, London is one of the most underrated cities. I think people like to criticise it because it is easy to sound like a discerning world traveller if you are of the opinion that London is ‘so passé’, and I think that cities like Paris still hold a more clichéd, romanticised appeal as ‘it’ places.

So, certainly not knocking Paris, but I love London. It is easy to get around, there is so much to do from shows & markets to amazing food and easy day trips, and so many sights that are culturally and historically iconic. London has an extensive amount of museums that are dynamic and interesting (and mostly free) and an incredible atmosphere.

So, now that you are forewarned of my enthusiasm for London, here is a relatively brief overview of our  week and a half in London.

Day 1 Ryan had never been to London so we started with the big ones.  We caught the underground to Charing Cross, so his first view of the city proper was Trafalgar Square. A stroll down to Buckingham Palace to wave at the Queen (Ryan actually did this), back through St James’s Park (past some scary Bec-sized swans), the Horse Guard Parade, past Westminster Abbey, the Houses of Parliament and across the river to Southbank- complete with Christmas market.

From there we followed the river all the way to London Bridge and ogled all of the nice pubs and eateries that we wouldn’t find time to visit and finished up at the London Dungeon. This was exactly what you’d expect, quite tacky but a lot of fun, somewhat reminiscent of Dracula’s on the Gold Coast sans singing & dancing.

In the evening we headed back to Shepherd’s Bush to see Skyfall. I ran out of time to blog about Moscow but it included an epic fail event as we tried to locate an ex-pat English cinema of which we’d heard rumour so that we could see the latest Bond. Glad to say it was worth the wait!

Day 2 Lunch at Heston Blumenthal’s restaurant The Fat Duck!!!! I will post separately about the lunch but in short this was something I would definitely be happy to apply the much overused phrase ‘once in a lifetime experience’ to!

The restaurant was situated in the picturesque village of Bray which is about 45 minutes from the centre of London. We stopped in at Heston’s pub the Hind’s Head for a drink beforehand whilst I tried to contain my excitement. The bartender talked me into trying a still cider… I will not be making that mistake again. Apart from the general disconcerting feeling that it would have been much nicer with bubbles and a tad colder, there was also an odd pre, mid and after taste as though a blue cheese might have been matured in the keg at some stage.

We strolled the 20 metres to The Fat Duck at the not-too-eager time of 11:55am for a midday booking. The restaurant was lovely. I guess most people have seen it on tv but it is a simply decorated old English cottage. The staff were very professional and welcoming without being pretentious or making you feel uncomfortable.

We started with a glass of Moet each and ordered a bottle of Yangarra Estate (the only McLaren Vale red we could vaguely afford). As they say, ‘In for a penny, in for a pound,’ or in this case ‘In for a week’s pay , in for a week and a half.’ 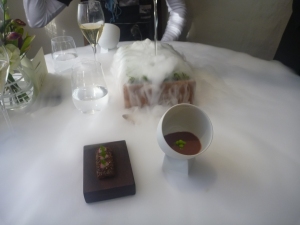 14 courses and 4 ½ hours later we were very, very content & happy with our decision to visit The Fat Duck. The vegetarian alternative was no less impressive than the standard menu and for most dishes was fairly similar. I did end up with one different dish that was sensational that included deep fried aioli balls – I happily offered Ryan one to try but did point out that giving one up for him was a huge gesture of love because they were so delicious. Not to be out done, he quickly returned the sentiment by offering me by saying that, although amazing, he would happily give up all of his spelt and umbles for me.

Day 3 Awesome day. Started with a visit to the Tower of London (including a Yeoman tour which I highly recommend) and finished with Cabaret at the Savoy Theatre.

Day 4 We started today with a very chilly visit to the Camden Markets. I was however quickly warmed up by the best quesadilla I have ever had in my life! When street food is good it’s gooood!

In the afternoon we paid a visit to the Natural History Museum & Science Museum. Whilst in the creepy jars section of the Natural History Museum, formally known as the Darwin Centre, we were offered the chance to participate in one of the museum’s free tours. This gave us the opportunity to visit the behind the scenes section of the Museum & view all of their really big creepy jars of pickled specimens. The highlight of this is the chance to see the giant squid they have on display in a glass tank that is longer than a double decker bus!

Hobbit-ed it up in the evening… and loved every second of it.

Day 5 We saw some proper London rain this morning & chose to take refuge at Sealife Aquarium. No cuttlefish (which is my personal benchmark for a stellar aquarium) but very nice. The rain did have the advantage of keeping the Winter Wonderland crowds at bay for our visit in the afternoon.  I’m not sure where the connection is but at Winter Wonderland, Christmas is synonymous with Bavarian beer hall… but I’m not complaining all that much.

Day 6 Day trip to Stonehenge. We took a tour with Premium tours that gets you to Stonehenge just after sunrise & allows you a semi-private (ie. with the twenty other people on the tour)viewing including the chance to walk amongst the stones. This is something else that I know a lot of people don’t rate very highly but I really enjoyed it.

The tour then took us to the tiny village of Lacock which boasts a general quaint English village atmosphere as well as Dumbledore’s house. The afternoon was spent in Bath before heading back to London to enjoy some sensational Asian tapas at Penang.

Day 8 Bit of a lazy start to the day followed by a quick trip to Spitalfield Markets, lunch at Brick Lane (amazing lime pickle), Greenwich, Picadilly Circus & then drinks with an old friend, Jason, at a 42 story champagne bar, an outstanding Craft Beer bar and a cheeky stout at the Gunmakers Arms… and if we’re being honest, this was topped up by a greasy McDonald’s beefless burger with fries back at Shepherd’s Bush!

Day 9 Last full day in London but not too late to squeeze in a quick trip to Westminster Abbey. We had been well soaked in sites of religious significance by this stage in the trip but I was very pleasantly surprised by how beautiful and how worth the visit Westminster Abbey was. It is absolutely mind boggling how many people have been buried at the Abbey, including a section called Poet’s Corner which is dedicated to significant British writers.

Believe it or not we managed to follow that up with lunch with a friend in Soho, a visit to the National Portrait Gallery to see a Marilyn Monroe exhibition, watching the National English Ballet’s The Nutcracker, a very average Italian dinner at Leicester Square, a return to Winter Wonderland for some last minute Christmas ornaments and then, finally, watching stand up comedian, Bill Bailey, at the Hammersmith Apollo.

So, in a nutshell, that was a week or so very well spent in London, not sure what there is not to love about it!

This entry was posted in Matryoshka, White Christmas and Reindeer Burgers, Travel and tagged London. Bookmark the permalink.