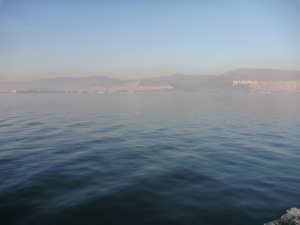 Not an official Turkish bath

The Turkish bath or Hamam is, according to many, a must for a visit to Turkey. I investigated a couple in the Old City area while we were staying in Istanbul but most of the reviews I found about them online suggested that they were fairly touristy in the worst kind of way – ie. instead of being tourist friendly and easy to use, the price was relatively high and the service perfunctory with a big focus on hassling for tips.

I was still quite keen to try the Turkish bath so I had two; the first at a hotel in Cannakale and the second at our hotel when we returned to Istanbul. Both were similar in style and are a variant on the traditional bath experience.

The bath begins by spending a few minutes in the sauna or steam room in order to open up your pores. You then enter the main bath room. Marble benches run around the outside of the circular room with marble sinks or bathing stations spaced around the edges. In the centre of the room there is a large, heated marble slab.

The first bath I went to was mixed. There was a man in there washing himself (no problem) and another man who seemed to be there in more of a spectator capacity (pretend he’s not there – no problem). You have the option of wearing a small towel or a bikini into the bath – I wore my bikini as they suggested that this is less awkward to manoeuvre around.

After laying down on the slab, the attendant pours tepid water over you from a bowl filled from the marble sinks. From there they proceed to massage and exfoliate you from head to toe, front and back with a rough mit.

Relaxation is the name of the game, but the next bit is mostly fun. The attendant dips a pillow case style towel into a soapy mixture and then swings it around several times till it is filled with foam. They then squeeze the foam over you, refill and repeat until you are a foamy mountain atop the marble slab. The attendant then lathers and massages the foam all over you before rinsing you off till you are squeaky clean and super soft.

At the first bath I followed this up with a one hour traditional massage – absolutely divine.

The second bath followed the same format but there were a few differences. The first was that the laid a couple of towels onto the slab for comfort, the second immediate difference was that there were no hairy observers sitting in the corner.

No tepid water and T.L.C at the second bath however – all of the rinses were with icy cold water. Refreshing and invigorating once the initial shock had worn off.

The second attendant was also nothing if not thorough. She scrubbed me down from head to toe with vigour – the same pressure and enthusiasm was applied to my face, décolletage and all the other soft and sensitive bits as was given to my feet and elbows. I had to check my back when I returned to the room to make sure I hadn’t lost skin along my vertebrae – scratch marks yes, but no significant grazes!

The first attendant thoughtfully started the exfoliation with my face, the second started from the toes up – I tried not to dwell on the fact that the mit that was now removing the bulk of my epidermis had already paid the same attention to my three-month travel-worn feet! (Hopefully the majority of the stank had been removed at the first bath!)

Where the first attendant had work around my bikini, moving the straps to one side where needed, the second unceremoniously turned by bikini bottoms into a g-string in order to maximise exfoliatable surface area.

She had just plunged her hand under the bikini while exfoliating my front but indicated that I should take the top off altogether while she was doing my back. This was tossed into a corner and remained there throughout the foam treatment resulting in the first time the girls have ever been massaged in a professional capacity.

With due credit to my firm handed and not remotely shy friend, she did spend a great deal more time of the foam treatment not only rubbing the foam into my skin but also massaging out the squillions of knots and ropey areas through my back and shoulders.

Another icy rinse off and we were done. Although the second left me a little more bruised and battered, both treatments were incredible. I have never felt so soft and smooth in my entire life… I think the only way you could replicate the same effect at home would be to fill your bath with cocoa butter and sleep in it.

A firm convert to the Turkish bath, whether it be super friendly or of the tough love variety, you can add me to the list of those selling it as a must-do for visitors to Turkey!

This entry was posted in Matryoshka, White Christmas and Reindeer Burgers, Travel and tagged Turkey, Turkish bath. Bookmark the permalink.