Beyond the Golden Circle: Reykjavik to Skaftafell 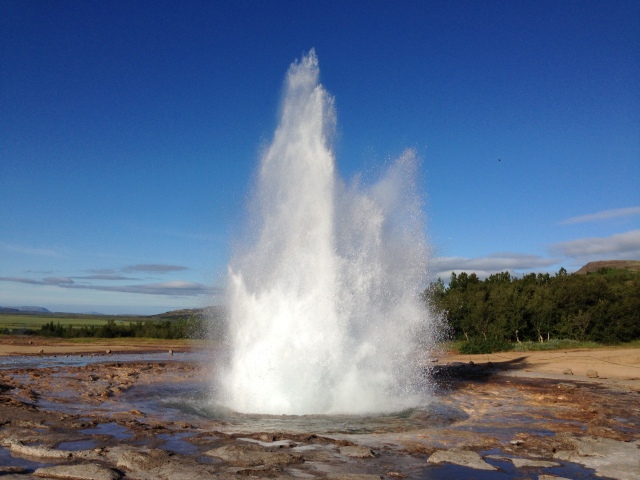 After returning to Reykjavik, a celebration to mark the end of the six day Laugavegur trek was in order. We decided to have a couple of drinks with the other members of our group at  a craft beer bar called Mikeller & Friends, one point of a trio of establishments known by locals as the Barmuda Triangle (because you will inevitably lose track of your friends as you hop between the three on a night out). The bar shares the building with a tasty, unnamed pizzeria who waived our drinks tab because they forgot to place our orders. At Icelandic prices, it is certainly worth getting your pizza late to save a few drinks worth of kronor.

It is easy to get used to sleeping with almost full light for twenty-four hours a day but rolling out of a bar well after midnight to a barely shadowy city is a little surreal. This bigger than expected night out saw us make the most of the late checkout time (11.00 am is pretty standard for most guesthouses) to catch up on some sleep. Subsequently our first day on the road had a much later start than anticipated. Our planned itinerary for day one was to tackle the much lauded Golden Circle.

Iceland’s Golden Circle is a popular trio of natural wonders that are linked only by the fact that they are easy to complete in a single day trip out of Reykjavik. The circle is comprised of Þingvellir (Thingvellir)  National Park, Geysir and Gullfoss.

Our first and only stop, as it turned out, was Þingvellir National Park. This was a lot more distinctive than I had anticipated. The park runs around the outskirts of a very large lake and sits on the juncture of the Mid-Atlantic Ridge, a place where two tectonic plates come together. This creates a couple of notable attractions.

The first is Silfra which is the underwater chasm between the plates. It’s claimed that the visibility under water is up to 100 metres, and the incredible clarity is dazzling even from the surface. There are regular dry suit snorkelling and diving trips through the Silfra costing from about $170 – $450 AUD. We didn’t get in the water this visit but it could well be on the list next time.

The second big feature of interest is distinctive cliff line created by the tectonic ridge. It is visually spectacular and also a politically significant site in Icelandic history. Þingvellir is the home of the Alþingi (Althingi) or historical parliament of Iceland. From around 930 Icelanders decided that they needed a meeting or gathering place to set laws and determine disputes. Each year Icelanders would travel from all around the country to meet for up to two weeks for the Alþingi. Each area was represented by a Godar (district leader) who would participate in the parliamentary proceedings. The gathering became a key social event for trade, arranging marriages and for the sharing of stories, with Icelanders travelling from all around the country to attend.

There are lots of sites of historical significance at Þingvellir, you can visit the Lögberg, the stone  that was believed to be the central podium for the Alþingi. The nominated lawspeaker would memorise all of Iceland’s laws and recite them from the Lögberg every year. Another key function of the Alþingi was the dispensing of justice. Near the Lögberg you can visit is the Drekkinghyalur, a pond that was used to drown women believed to be guilty of crimes such as infanticide and adultery. Men also had their own special places to meet horrible ends including Gálgaklettur (Gallows Rock) and Gálgaeyri (Scaffold Beach).

Although a very beautiful area, the less attractive side of Þingvellir was that we got our first real taste of how inundated Iceland is with tourists during their summer season. People were rocking up by the coach load and, as you would be aware, one of the immutable laws of the universe is that people get dumber in groups. Case in point, try organising a dinner out with your best friend – easy. Try organising a night out with six of your best friends – nightmare. At key attractions in Iceland, people reach herd proportions so you can imagine how the IQ of people (who are probably reasonably intelligent in their day to day lives) becomes diluted.

Although there is not too much explicitly bad tourist behaviour there is enough to make you uncomfortable sometimes. One of the biggest frustrations is seeing people leaving the set paths to try and get their own clear or uniquely insta-worthy shot at the expense of the environment. It is very easy to see unofficial paths that have been worn into the natural environment because one or two people have left the path and a thousand have followed.

Due to the masses of people and some fairly average weather we decided to call it a day with the plan to try our luck on an early start to visit Geysir and Gullfoss the next day. We spent the night at the beautiful Bergþórshváll (Bergthorshvall)  just south of Hvolsvöllur. Bergþórshváll is the farm at the centre of one of Iceland’s most famous sagas, Burnt Njáll. The saga describes a blood feud that developed between the heroic warrior, Gunnar Hámundarson and his close friend Njáll Þorgeirsson, due to tension between their wives. As the title suggests, a key plot point is the burning of Njáll and his family at their farm.

Historical significance aside, the farm is also incredibly beautiful and the guesthouse is situated in the middle of nowhere (in the very best way). The farm is overlooked by the infamous volcano Eyjafjallajökull that became globally infamous when it spewed the teensiest bit of volcanic ash into the air in 2010 (enough to close most European airspace for about a week).

On the road again – Geysir and Gullfoss

The gamble to delay the final stages of the Golden Circle paid off and we arrived at Geysir at about 7.00 am to beautifully clear blue skies. The Great Geysir for which the site is named erupts very infrequently with many years in between eruptions at some points (depending on seismic activity). It has a smaller friend, Strokkur, who is much more reliable. Strokkur erupts every 5-10 minutes and generally shoots near boiling water up to 20 metres in the air.

Much like the flame spurt in the Fire Swamp is preceded by a small popping sound, Strokkur’s eruptions are preceded by some distinctive bubbling and a small dip in the pool’s water levels before each spray, giving you enough notice to get your camera ready. In case you are thinking, geyser be damned where can I see this Fire Swamp? I should inform you that you will only be able to see it by rectifying what was clearly a negligent  oversight in your upbringing and watching The Princess Bride on Netflix immediately.

The impressive Gullfoss waterfall was similarly (and delightfully)absent of tourists giving us a blissful half an hour to ooh and aah at the impressive double drop of the 32 metre fall by ourselves. The glorious weather delivered a very pretty double rainbow. As we left at 9.00 am the first tour bus was just pulling up. We have found around the entire country that an early start to beat the crowds is not as early as you might think. Arriving anytime before 9.00 am seems to be enough to beat the masses and is well worth the effort.

From there we headed east along the coast to check out some equally beautiful (but much more crowded) waterfalls including Seljalandsfoss, Gljufrabui and Skógafoss. At around 60 metres, Skógafoss is one of the tallest waterfalls in Iceland. A legend also claims that there is Viking treasure behind it.

We continued east along the coast and past the beautiful black sand beaches and decided to visit a site that had been recommended by several locals, Sólheimasandur. The beach is the site of a US DC-3 airplane wreckage from a crash landing in 1973. It is easy to find in peak season as there are dozens of cars parked in a fairly random spot on the coast road and dozens of people streaming off toward the horizon. What our friends failed to mention with their suggestion is that it is more than a brief jaunt off the main road. A cheeky and unexpected 8 km round trip later and we had visited the impressive wreckage. 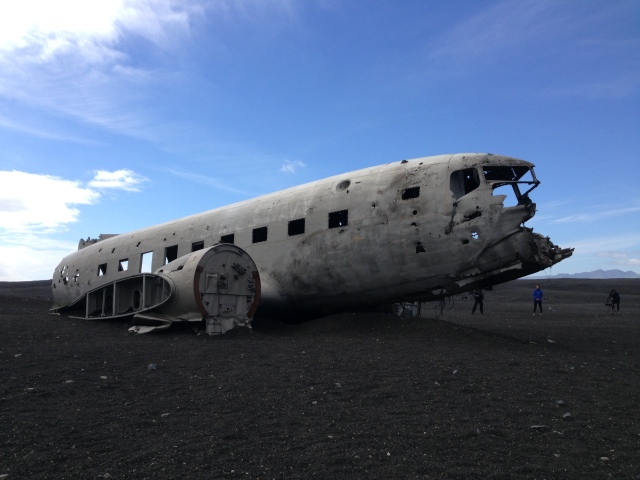 This was another key site for tourist-induced face-palm interaction. While most people ducked in and out around the wreckage taking the pictures they wanted and then stepping back to let others do the same, a few strugglers decided to have full personal photo shoots of themselves posed and draped all over the plane. Super weird and super frustrating.  It was here I discovered that the brighter your jacket, the more likely you are to spend an extended amount of time in conspicuous places blissfully unaware of the dozens of other people around you. Take your selfie and get out of the way.

The unexpected mini-trek and a check-in deadline of  7.00 pm meant that we ran out of time to stop at Vik and some of the other sites along the south east corner. We drove almost three hours straight from Sólheimasandur to our accommodation in Kálfafellstaddur ready to explore the scenic Skaftafell area and surrounds.

Accommodation Bergþórshváll Farm. It is worth the 20 km drive from the main road to stay in this serene and well equipped guesthouse. It is very spacious and has a good sized kitchen as well as laundry facilities. I would recommend spending two nights here if possible as a base to explore the surrounds and to enjoy the beautiful farm location itself.

1 Response to Beyond the Golden Circle: Reykjavik to Skaftafell